Increased pressure and changes in our life style have led to improper diet management which has further accelerated increased number of patients having ulcer. Ulcer, is a gastro-intestinal disorder, when occurs in stomach is known as gastric ulcer and in the past part of small intestine it is duodenum ulcer (Chauhan et al., 2013). It occurs due to imbalance between the offensive (pepsin, gastric acid, bile, stress) and protective (mucus, prostaglandin, blood flow) factors like GRAM negative BACTERIA Helicobacter pylori (Edwin et al., 2019), NSAIDs (Martin et al.,1989), Tobacco smoking (Weil et al.,1995), Crohn’s disease (Wakefield et al., 1989) and some other health situations can also promote ulcer formation. Belching, vomiting, fullness of stomach, acidity, abdominal pain and bleeding are the most important indications of ulcer. Synthetic antiulcer drugs like H2 anti-histaminics, proton pump inhibitors, ulcer protective and ulcer healing drugs are used to treat ulcer but these drugs shows some common side effects like headache, nausea, vomiting, fatigue, constipation, giddiness and dizziness. To avoid side-effects herbal drugs are useful in combating ulcer with no or reduced side effect.

India is a country of great ecological diversity and its diverse climate range and varied habitat have led it to constitute 7-8% of worlds total plant species. Many herbal plants are found in India that have different medicinal property and because of better adaptation, compatibility of culture with human body 70-80% of country’s population still uses herbal treatment for primary healthcare (Savithramma et al., 2011).

Male Albino Wistar rat weighing between 150-200g were used for the study throughout the experiment and placed in polypropylene cages (32 X 24 X 16). The animals were housed in the departmental animal house (approval no: 1502/ PO/a/11/ CPCSEA) of NSCBIP at (25°C ± 2°C, 12:12 h light and Dark cycle). Standard rodent pellet diet and water ad libitum were fed to the animals. The animals were purchased from CPCSEA authorized animal breeder. All the experimental procedure and protocols used in the study were approved by institutional animal ethics committee (IAEC-NSCBIP), as per CPCSEA guidelines.

In all the experimental models the animals were kept in fasting for 24 hrs prior to the experiments, were divided into four groups and, six animals each. Group I served as untreated control, Group II acted as standard (omeprazole 20mg/kg, p.o) Group III and Group IV treated with pm 250mg/kg, 500mg/kg respectively.

The fresh tender leaves of Mangifera indica, Zingiber officinale, Andrographis paniculata, Enhydra flactuans, Cynodon dactylon, Azadirachta indica, and Centella asiatica were collected from the Medicinal garden of Netaji Subhas Chandra Bose Institute of Pharmacy, Chakdaha, Nadia, and West Bengal. The fresh leaves of each plant were cleaned with distilled water, shed dried to remove the addition water, grinded, strained and expressed and the liquid were collected separately. 2 units of expressed liquid from the leaves of each Mangifera indica, Cynodon dactylon, Andrographis paniculata and 1 unit of expressed liquid from the leaves of each Azadirachta indica, Zingiber officinale, Centella asiatica, Enhydra flactuans were mixed thoroughly, and the mixture used for the study.

Stress is a condition which generate from any demand from the body. Any type of stress i.e. mental, psychological, physical aggravate the ulcer organic condition or even generate the ulcer in victim.

In this model Ulcer were induced by immersing the rats in water for 4 hours. 30 min prior to immersion all the rats were treated as per their groups. The 1st group received normal saline 2 ml/kg (control), the 2nd group received omeprazole 20 mg/kg, the 3rd group received LDPM, and the 4th group received HDPM by oral route. After 30 min of the treatment, the animals were placed individually in a restricted cage and immured them in water tank (20°C–23°C) for 4 h. After 4 h, the animals were taken out from the water immersion cage and sacrificed. The stomach of each animal was isolated, mounted and the number of ulcer formation was counted for evaluation.

Pylorus is the gateway of intestine, the acid produces from stomach and the food content pass to the intestine via pyloric sphincter. Ligation in the pylorus can stop the drainage of acid content from stomach, by which ulcer generate in the stomach.

The abdomen was opened under light ether anaesthesia through a small midline incision made just below the xiphoid process. Pyloric portion of the stomach is slightly lifted out and ligated avoiding traction to the pylorus or damage to its blood supply. Careful replacement of the stomach was done thereafter interrupted sutures were used for proper abdominal wall closure. All the animals were treated as per their group. After 1hour (200 mg/kg, p.o) aspirin was administered to all the animals, the animals are deprived food and water during the postoperative period and 30 min prior to immersion all the rats were treated as per their groups. After 4h the animals were sacrificed and the gastric content was collected. The total volume of gastric content was measured (Suresh et al., 2010). The gastric contents were centrifuged for 10 min at 1000 rpm (Kulkarni, 1999). The supernatant liquid was separated out and 1 ml of this was diluted to 10 ml with distilled water. The solution was titrated against 0.01N NaOH using phenolphthalein as indicator, to the endpoint when the solution turned to orange colour. Titration was further continued obtain pink colour. The volume of NaOH required was noted and was taken as corresponding to the total acidity (Uddin et al., 2005; Wakefield et al., 1989).

The data are expressed as Mean ± SEM, n=6, p<0.001 while compared with untreated control The significance among the groups was assessed using (ANOVA) i.e. one way analysis of variance which is further followed by Dunnet’s comparison test between the data of control and treated groups.

In this study, the poly-herbal mixture contains Mangifera indica, Zingiber officinale, Andrographis paniculata, Enhydra flactuans, Cynodon dactylon, Azadirachta indica, Centella asiatica was evaluated for anti-ulcer activity as it is being used in the folk medicine in eastern India for treating the same from ancient time. As PM is traditionally used as a gastro-protective and ulcer healing, there was always a need to reveal the anti-ulcer potential of the same scientifically. Most of the plant comprising of this poly-herbal mixture has shown significant anti-ulcer, gastro-protective activity, additionally some has been proved for their anti-oxidant and anti-microbial properties. So any drug which is having free radical scavenging activity or/and anti-microbial activity definite to show anti-ulcer properties in variable extent. A poly-herbal mixture containing these types of component surely exhibit promising antiulcer properties.

In the present study there was an attempt to find out the anti-ulcer properties of PM in two different models like pyloric ligation model and stress induced anti-ulcer model, so here it may also validate the anti-ulcer activity of PM in stress related condition.

All the values are mean ± SEM, n=6, p<0.001 while compared with untreated control

All the values are, mean±SEM, n=6, p<0.001 while compared with untreated control 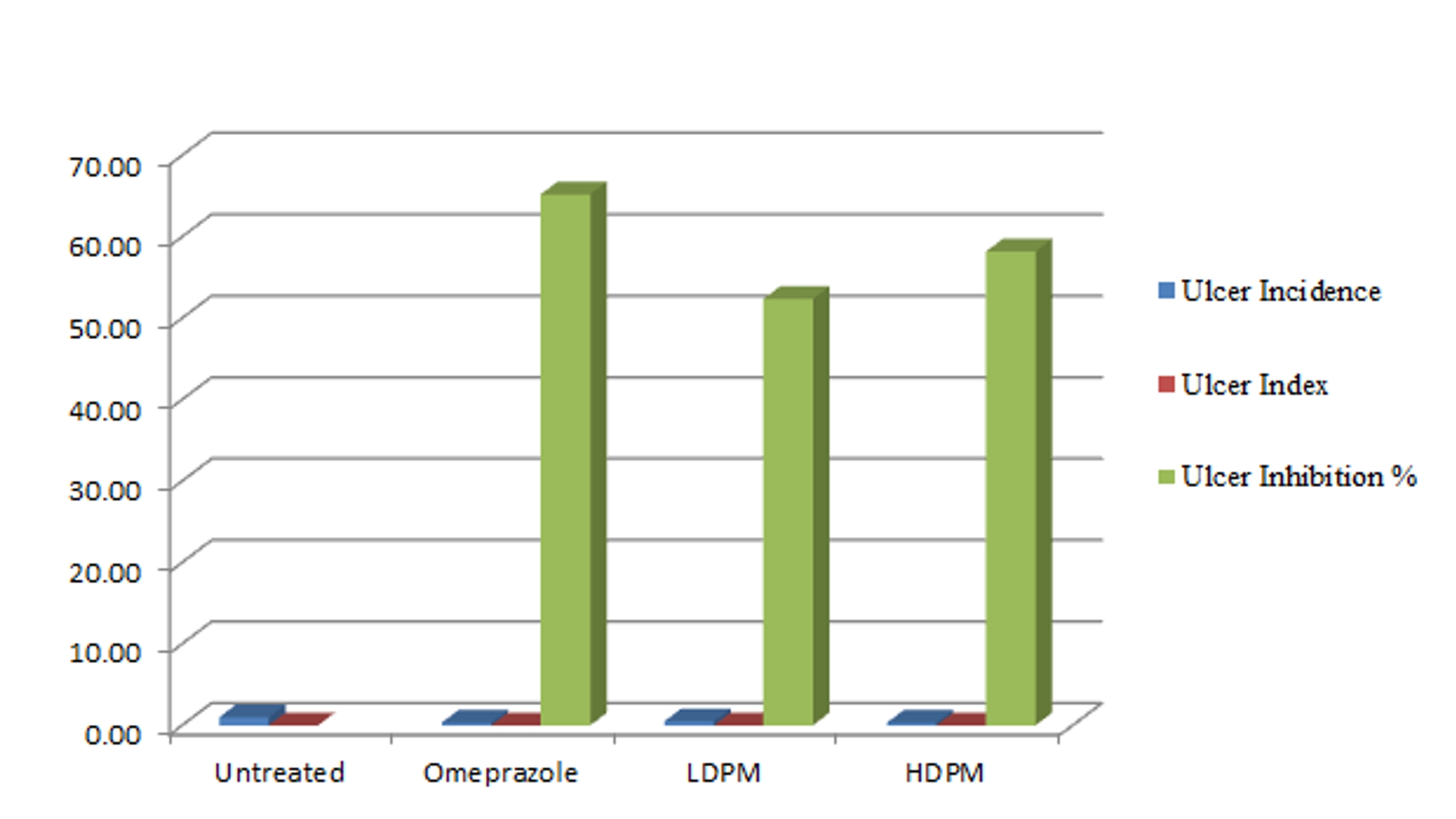 From the above findings it is established that PM having significant anti-ulcer activity while compare with the untreated control group, this finding not only exactly correlate the folk use of PM as an anti-ulcer drug, but also establish its potency against stress related ulcer condition.

The authors have no conflict of interest.

Panneerselvam S, Arumugam G. 2011. A biochemical study on the gastroprotective effect of hydroalcoholic extract of Andrographis paniculata in rats. Indian Journal of Pharmacology, 43(4):402.