Background: Pogostemon benghalensis is an important aromatic herb. Since the ancient time plant is being used as medicines, agrochemicals and pharmaceutical by large number of tribal and rural people. Almost all parts of the plant are helpful to treat different kinds of aliments; very few of these claims have been reported and scientifically studied. Objectives: The present study focused on the phytochemical analysis, antioxidant activity, RBC haemolysis and antimicrobial activity. Materials and methods: Aqueous and methanol extracts of leaves of P. benghalesis,  used for Phytochemical analysis revealed major components such as flavonoids, saponins, tannins, glycosides, alkaloids and phenolic compounds present in both PBE. Results and conclusion: Results of the study showed that P. benghalensis extract showed significant antioxidant and RBC haemolysis activity. Antibacterial analysis of P. benghalensis showed moderate to high activity against Staphylococcus aureus, Escherichia coli, Salmonella typhi, Streptococcus pyogenes and Klebsiella pneumonia, respectively. Therefore, the phytoconstituents in this plant are found to be with high medicinal value and can be explored for further studies. There seems enormous potential and scope for future research and further pharmacological investigation on Pogostemon benghalensis.

Medicinal plants have been used by mankind for its therapeutic value. Impressive number of modern drugs has been isolated from natural sources which were based on the uses of the agents in traditional medicine. This plant-based, traditional medicine system continues to play an essential role in health care, with about 80% of the world’s inhabitants relying mainly on traditional medicines for their primary health care. According to World Health Organization (WHO), medicinal plants would be the best source to obtain a variety of drugs (Doughari and El-mahmood, 2008).

Pogostemon benghalensis belongs to family Lamiaceae. It is worldwide in distribution. It is perennial, aromatic, pubescent, under shrub; most common in Melghat at higher elevations forming large patches in shaded valleys and along the river banks (Naise and Bhadange 2014). The oil is used as a stimulant and styptic. Since the ancient time plant is being used as medicines, agrochemicals and pharmaceutical by large number of tribal and rural people. The study of primary phytochemical analysis of aqueous, methanolic extract of this plant showed the presence of various secondary metabolites like alkaloids, tannins, carbohydrates, sterol, terpenoids, quinon and flavonoids etc. Essential oil from leaf contains few monoterpene hydrocarbons, a moderate content of sesquiterpenes and high content of aliphatic hydrocarbons.

There are about 47 species mainly used for ethanomedicine and traditional medicinal system. It’s mainly used for medicinal purpose such as diuretic, sedative, digestive, antiparasitic, carminative, appetizer, anticonvulsant, anti-inflammatory, and stimulant. Lamiaceae members are well known for their medicinal properties (Chopra, 1956).

Pogostemon benghalensis was selected for the study strictly on the basis of its ethanobotanical uses confirmed from the traditional healers of study area. The present paper deals with its in vitro antibacterial, antioxidant, phytochemical and haemolysis activity.

Plant sample was collected from a field near Vajreshwari , Thane district, Maharashtra. It is 31 km away from the nearest railway station of Virar. The damage less leaves were dried in hot air oven at 60oC-65oC for 12hrs and blended into powder, this powder of Pogostemon bengalensis were used for aqueous and methanol extraction.

Standard methods were used for the preliminary phytochemical screening of phyto-components like, Flavanoids, Saponins, Tanins, Glycosides, Phenols, and Alkaloids (Harborne, 1973).

Cheap plastic “disposable” cuvettes/eppendorf tubes, which are not attacked by methanol or ethanol, are commonly used for the assay (Bondet, 1997). The prepared DPPH should be maintained at pH in the range 5.0 to 6.5.The initial DPPH concentration should give absorbance values less than 1.0 for 0.05-0.1mM concentration Method was used for antioxidant determination (Mandal et.al, 2009; Blois, 1958).

Methanolic extract of plant material was used with varying concentration ranging from (50-300ug/ml). Stock solution was added according to varying concentration in test and colour blank tube. After adding stock and diluents, DPPH reagent was added in dark in test and incubated for half an hour. Absorbance was measured at 517 nm spectrophotometrically. Ascorbic acid was used as a standard.

The percentage DPPH radical scavenging activity was calculated from the absorption value by the following equation:

Antibacterial assay performed by agar disc diffusion method (Samy and Ignacimuthu, 2000). All the microbial media used in this experiment were obtained from (Himedia Laboratories, Mumbai). Overnight culture was prepared by inoculating approximately in 2ml nutrient broth with 2-3 colonies of each organism taken from nutrient agar. Broths were incubated overnight 35 0C with shaking. Inoculate were prepared by diluting overnight bacterial cultures approximately 10 cells per ml in sterile saline. The suspension of tested bacterial strains (0.1ml of cells per ml) was spread on Muller-Hinton agar plates (Bauer et al., 1966). Filter paper discs (6mm diameter) were impregnated in 20 microliter of the plant extract and dried aseptically. The disc are placed on the bacterial lawn of agar plates and incubated at 37°C for 24 hrs. The diameter of the inhibition zones were measured using a scale in millimeters. For comparative evaluation, Streptomycin (HiMedia Laboratories Pvt. Ltd., 10mcg/disc) were used as a positive reference standard. Then the cultured plates were incubated for 48 hrs at Room Temperature (RT). After incubation, inhibition of the bacterial growth was measured in Millimeters.

This test was performed according to ECVAM DB-ALM INVITTOX Protocol No. 37. Materials used for haemolysis assay was human blood obtained from LATA LABS, Vasai-(W.). The blood sample was diluted by adding into approximately 20ml of phosphate buffer saline. RBC was centrifuged at room temperature. Supernatant (plasma) was aspirated carefully from the surface of the RBC and washed three to four times with Phosphate Buffer Saline (pH7.4). This washing procedure was carried out in order to remove the bulk of the white blood cells, any traces of plasma and Buffy coat.

After adding test sample, total volume was made up to 1ml by adding P. benghalensis extract. From this 25µl of mixture was discarded. Rapidly 25µl of RBC suspension was added in each tube containing 8x109 cells/ml incubate for 10 minutes. After incubation, the reaction was terminated by a rapid high speed centrifugation at 3500 rpm for 1 minute (for removing intact cells and debris from the medium). After centrifugation, supernatant was transferred to another eppendorf tube and absorbance was measured at 540 nm, 560 nm and 575 nm. Blank was set which contain test sample and P. benghalensis extract (540 nm and 575 nm for protein denaturation and 560nm for haemolysis). Three controls were set which include positive, negative and SDS control. Positive control gives the 100% haemolysis value which contains 975µl of D/W+25µl of RBC. Negative control which contains 975µl of PBS+25µl of RBC gives zero haemolysis value. SDS control was set for protein denaturation. After calculating % Haemolysis and denaturation index of each concentration, L/D ratio was determined (Naim et al., 1976).

The preliminary analysis of phytochemicals in methanol and aqueous extract of P. benghalensis leaves showed the presence of phytoconstituents such as flavonoids, phenols, alkaloids, saponins, tannins and glycosides (Table1).

The results were found that flavonoid content which showed positive correlations with the antioxidant activity. Flavonoids, including flavones, flavanols, and Condensed tannins are plant secondary metabolites and their antioxidant activities depend on the presence of free OH groups, especially 3- OH. Evaluated the scavenging effect of the essential oils in DPPH reduction was investigated against a positive control (Standard Ascorbic Acid) (Jadhav et.al.2018).  The more antioxidants occurred in the oils, the more DPPH reduction will occur. High reduction of DPPH is related to the high scavenging activity performed by particular sample. At a higher concentration, these essential oils may exhibit more significant free radical scavenging activity.

The antibacterial activity of Pogostemon bengalensis against test organisms is shown in (Table 4).

Studies on Antimicrobial Activities and Phytochemical Analysis of the Plant, the methanol extract of the stem and root bark of P. benghalensis demonstrated activity against pathogenic bacterial strains like Bacillus subtilis, Staphylococcus aureus, E. coli, Klebsiella pneumonia and S. typhi in the agar diffusion test system for the first time which validated its potential in broad spectrum antibacterial activity and these extract either individually or in combination can be used as formulation to treat the infectious diseases caused by the test organism . Whereas Antimicrobial activity of the plant under study showed that all the extracts were showing zone of inhibition against the test bacteria and maximum zone of inhibition was observed with methanolic extract. The comparative analysis was done using standard antibiotic streptomycin and thus the investigation showed that P. benghalensis plant have significant antimicrobial activity.

There are several reports indicating the antimicrobial potential of various medicinal plants. However the antibacterial activity against pathogenic bacterial strains was reported by very few workers (Koche et al., 2012).

RBC haemolysis activity of P. benghalensis was less than 50% at 15mg/ml concentration (Figure 1 and Table 6). 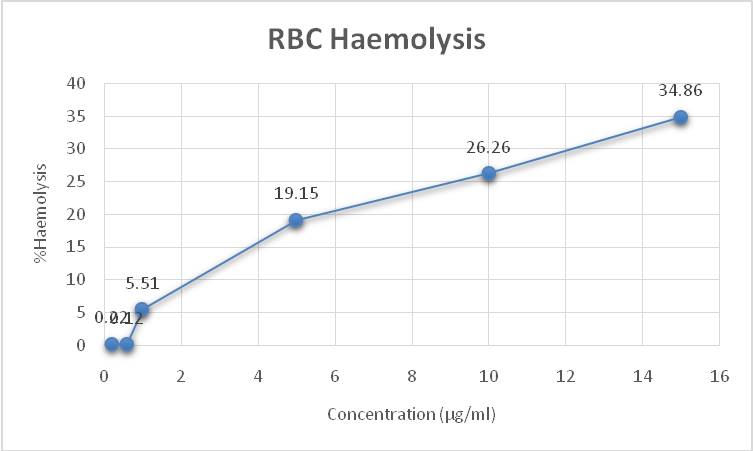 So it is less irritant and can be used in production of skin oilments and cosmetics. The efficacy and stability of the extracts in these formulations, however, needs to be studied further.

In Vivo hemolysis can be caused by a large number of medical conditions, including many Gram-positive bacteria (e.g., Streptococcus, Enterococcus, and Staphylococcus), some parasites (e.g., Plasmodium), some autoimmune disorders (e.g., drug-induced hemolytic anemia), some genetic disorders (e.g., Sickle-cell disease or G6PD deficiency), or blood with too low a solute concentration (hypotonic to cells). In Vitro hemolysis can be caused by improper technique during collection of blood specimens, by the effects of mechanical processing of blood, or by bacterial action in cultured blood specimens (Orf and Cunnington, 2015).

The phytochemical screening study revealed the presence of major phytochemical constituents such as saponins, tannins, flavonoids, glycosides and phenolic compounds in P. benghalensis.

Exploitation of these pharmacological properties requires further investigation of these active ingredients by implementation techniques of extraction, purification, separation, crystallization and identification.

A good antimicrobial activity was observed of P. benghalensis against common disease causing agents, both gram positive i.e. S. aureus, S. pyogens, and gram negative i.e. E. coli, K. pneumoniae, and S. typhi. Thus, it can be used as a good source for the development of new medicines and natural therapies against these potent microorganisms. On the basis of the results of the study, P. benghalensis has significant antioxidant activity and reducing power. Even though antioxidant activity was low than the standard, it’s considerably significant. The antioxidants have potential for application in food, Pharmaceuticals and cosmetics. RBC haemolysis activity of P. benghalensis was less than 50% at 15mg/ml concentration. So it is, less irritant and can be used in production of skin oilments and cosmetics. The efficacy and stability of the extracts in these formulations, however, needs further investigations.

The authors alone are responsible for the content and writing of this article.

The authors are thankful the Principal and Management to support and provide all facilities to do this work.