Objective: The aim of present research work was to develop and evaluate the antifungal drug loaded liposomal nail lacquer.  Antifungal nail lacquer which is used in treatment of Onychomycosis nail fungal disorder, Onychomycosis is common fungal nail infection causes by the pathogens. The objective of the this formulation to enhanced permeation of luliconazole across the nail plate, delivered via liposome-dispersed nail lacquer, can be attributed to intact permeation of lipid vesicles across the nail plate due to it's a small vesicular size and also to the generated hydration force and osmotic gradient.  Material and Methods: Initially liposomal suspension (LF) was prepared by Phosphatidylcholine, Cholesterol and luliconazole were dissolved in chloroform/methanol (2:1, v/v) mixture and formulated by modified film hydration technique. Then optimized formulation of liposomal suspension was further used to prepare nail formulation. Results and Conclusion: Among different formulations, the formulation (LF-8) was showed good drug entrapment - 69.61±1.09, average particle - 5.36±0.12 and zeta potential - 54.91±3.57. The optimized formulation of liposomal suspension LF-8 was further used to prepare nail formulation. The luliconazole loaded nail lacquer formulation (LLNLF-4) was showed highest In-vitro Drug Release (97.38±3.64), antifungal activity and smoothness among the other formulations. Nail lacquer is mostly applicable for those drugs which have poor bioavailability in oral formulation. This technique is used to maximize the topical bioavailability of drug across the nail.

Topical treatment of skin and nail diseases is desirable in terms of patient acceptability and reduction of side effects associated with systemic drug delivery. This is particularly the case for nail diseases as they are frequently difficult to cure and also require long periods of treatment (Kassan et al., 1996). The nail plate is a highly keratinized tissue, which is characterized by low permeability to diffusing substance. The nail diseases are widely spread in the population, particularly among elderly and immune- compromised patients (Mohorcic et al., 2007). Current research on nail permeation focuses on altering the, nail plate barrier by means of chemical treatments and penetration enhancers (Malhotra et al., 2002).  The great majority of superficial fungal infections are caused by dermatophytes, which belong to one of three genera (Trichophyton, Epidermophyton, and Microsporum), with T. rubrum being the most prominent cause of nail infection (Haneke et al., 1999)  Onychomycosis is a fungal infection usually caused by a special type of fungus known as a dermatophyte (Hui et al., 2004).

Disorders of nail unit range from relatively innocuous conditions such as the pigmentation in heavy smokers, to painful and debilitating states where the nail unit can be dystrophies, hypertrophied, inflamed, infected etc. Such conditions affect patients physically as well as socially and psychologically and can seriously affect the quality of life (Vivek et al., 2012).

Many nail diseases are notoriously difficult to cure, need a long duration of treatment is common. The treatment of onychomycosis has improved considerably over the past several decades, following the introduction of the oral antifungals terbinafine and itraconazole. However, these drugs may have side effects such as liver damage or drug interactions, which are particularly relevant in the elderly population.  Oral therapy has the inherent disadvantages of systemic adverse effects and drug interactions while topical therapy is limited by the low permeability of the nail plate (Hao et al., 2008).

Thus, a suitable carrier may be needed to enhance drug penetration through the nail barrier. Dermatologists have long used mechanical methods of enhancing nail penetration, including nail abrasion and nail avulsion, but these methods have varying results in addition to being invasive and potentially painful (Kataria et al.,  2016).

Therefore current research focuses on liposome is a spherical-shaped vesicle that is composed of one or more phospholipid bilayers, which closely resembles the structure of cell membranes. The ability of liposome to encapsulate hydrophilic or lipophilic drugs have allowed these vesicles to become useful drug delivery systems (Shivani et al., 2018).

Therefore the topical delivery through nails also known as transungual drug delivery system came into picture. But transungual delivery had its own challenges. Luliconazole it is anti-fungal drug which inhibited growth of all filamentous fungi at low concentration (Brown et al., 2009).

Recent advances in topical transungual delivery had come up with antifungal nail lacquers. Current research on nail permeation focuses on altering the nail plate barrier by means of chemical treatments and penetration.

Liposome was prepared by method with some modification. Phosphatidylcholine, Cholesterol and Luliconazole were dissolved in chloroform/methanol (2:1, v/v) mixture and subsequently transfer red into appear-shaped flask connected to a Rota vapor (Buchi-type). Speed was maintained at 150 RPM, vacuum applied and the thin film were formed by slow removal of the solvents at 40°C.The lipid film was maintained under vacuum for 12 hr in a desicater to remove solvent traces and subsequently it was hydrated with a Saline Phosphate Buffer of pH 7.4 solution at 40°C under continuous rotation of the flask until a dispersion was formed (about1h).

The final suspension consisted of multi lamellar vesicles was subjected to vortex for two 5-min periods and kept for 30 minutes. The composition of liposome formulations were given below:

Morphology: Scanning electron microscopy was utilized to examine the morphology   of vesicles.

Entrapment Efficiency: The liposome suspension was ultra-centrifuged at 5000 RPM for1 hr. by using ultra centrifuge to separate the free drug. Supernatant contained liposome in suspended stage and free drug at the wall of centrifugation tube. The supernatant was collected and again centrifuged at 5000 rpm at for 30 minutes. A clear solution of supernatant and pellets of liposome were obtained. The pellet containing only liposome was resuspended in distilled water until further processing.

The liposome free from unentrapped drug were soaked in 10 ml of methanol and then sonicated for 10 min. The vesicles were broken to release the drug, which was then estimated for the drug content. The absorbance of the drug was noted at 393.7 nm. The entrapment efficiency was then calculated using following equation.

Particle Size and Zeta Potential Determination: Particle size and zeta potential were determined by zeta seizer. Analysis time was kept for 60s and average zeta potential and charge on the liposome was determined.

In-vitro Drug Release Study: In-vitro release studies were performed using modified Franz diffusion cell. Dialysis membrane (Hi Media molecular weight 5000) was placed between receptor and donor compartments. Luliconazole liposomal suspension was placed in the donor compartment and the receptor compartment was filled with phosphate buffer, pH 7.4 (18 ml). The diffusion cells were maintained at 37±0.5°C with stirring at 200 RPM throughout the experiment. At fixed time intervals, 1ml of aliquots were withdrawn from receiver compartment through side tube and analyzed by UV-Visible Spectrophotometer to determine the in-vitro release amount of drug (Gupchup and Zatz, 1999).

Nail lacquer was prepared with liposome suspension loaded with a luliconazole (1%) using the formulation ingredients as mentioned in Table 2. Initially, the nail lacquer was formulated by simple mixing method. In this process the required quantity of Eudragit RL-100 was added and then weighed amount of ethyl cellulose was added, then mixed with liposome suspension, Dibutyl phthalate and ethyl acetate was added and mixed until no lumps were formed, then the final volume is made up to 100 ml with ethyl alcohol.

Non-volatile Content: Formulated nail lacquer (5 ml) was evenly spread in a glass petri plate with an area of 6.2 cm2. Petri plate was then weighed and dried at 105 °C for 1 h. The reduction in the weight after drying was reported as total weight of non-volatile contents in nail lacquer.

Film Drying Time: A thin, single film (300 μ L) of formulated nail lacquer was cast on a glass petri plate of area equivalent to 12.5 cm2, with the aid of a lacquer applicator brush. The time required to form a dry film was reported as drying time of the film.

Smoothness: The smoothness was determined by pouring the sample of nail lacquer approximately 1.5 inches on a glass plate and made to rise vertically.

The antifungal activity was screened by disc diffusion method. The Sabouraud’s dextrose agar plates were inoculated with the fungal culture of Candida albicans (72h culture). Sabouraud Dextrose Broth cultures were prepared in test tubes. Using sterile cotton swab, the surface of Sabouraud’s Dextrose Agar plates were swabbed to prepare lawn cultures. The agar surface had dried after the 5 min. wells were dug using sterile cork borer aseptically. Wells were saturated with nail lacquers six formulations. Without liposome based formulation was used for comparison. The plates were incubated at 28 ºC for 24-48 hrs. The diameters of zones of inhibition were measured using a scale to the nearest millimeter.

Preparation and Evaluation of Liposomal Suspension

Morphology: The scanning electron micrograph of examined formulation (LF-8) was represented the outline and the core of the spherical vesicles proving the vesicular characteristics of the prepared formulation. The examined liposomes (LF-8) were vesicular shape with nano size in diameter Figure 2. The number of liposomes vesicle count was counted by haemocytometer under an optical microscope. The vesicle count was found to be inversely related to particle size liposome, as with increase in particle size the vesicle count was decreased accordingly.

All liposomal formulations were found to be in the sub-micron to nano size range. The formula LF-8 had the smallest size 5.53±0.21 (µm) while the formula LF-2 had the largest size. The zeta potential values of the formulations were detected to be in the range of −55 mV to −26 mV. The formula LF-8 was showed the highest Zeta potential 54.94±2.27 (mv) and also showed significantly the highest percent of entrapment efficiency approaching 69.61±1.09 % Figure 3- 7. Table 3 showed the main properties of the prepared Luliconazole loaded liposomal formulation 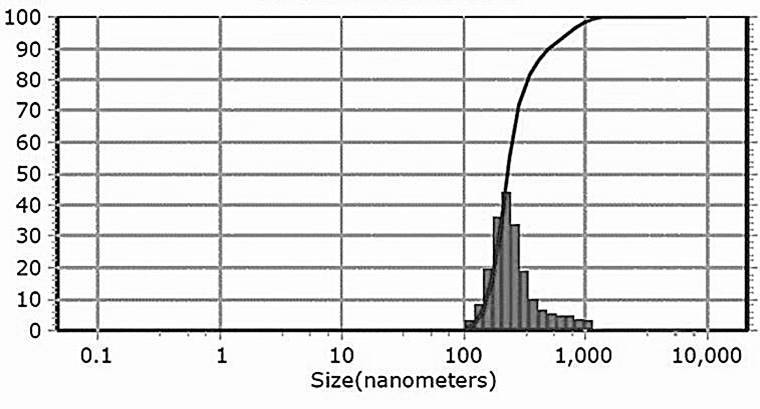 Preparation and Evaluation of Nail Lacquer

The application and performance properties of nail coating depend greatly upon volatility characteristics of its solvent system and therefore on its drying time. The values of the drying time were found in the range of 67-79 sec. As the polymer concentration increased drying time increased. This is a character of a film. It was observed formulation LLNLF-4 showed good smoothness due to lower polymer concentration and the color was found to be transparent. Formulation LLNLF-4 showed good gloss compared to LLNLF-5- LLNLF-6.

In-vitro drug release studies conducted with various formulations of Luliconazole are graphically represented in Figure 9. The comparative release study of Luliconazole from Luliconazole Loaded Liposomal Based Nail Lacquer Formulation (LLNLF-4) showed good release pattern and no deteriorative effect had been observed after luliconazole loaded liposome incorporation into nail. So after considering the other parameters i.e. drying time, glossiness etc. the formulation LLNLF-4 was chosen for the further study. 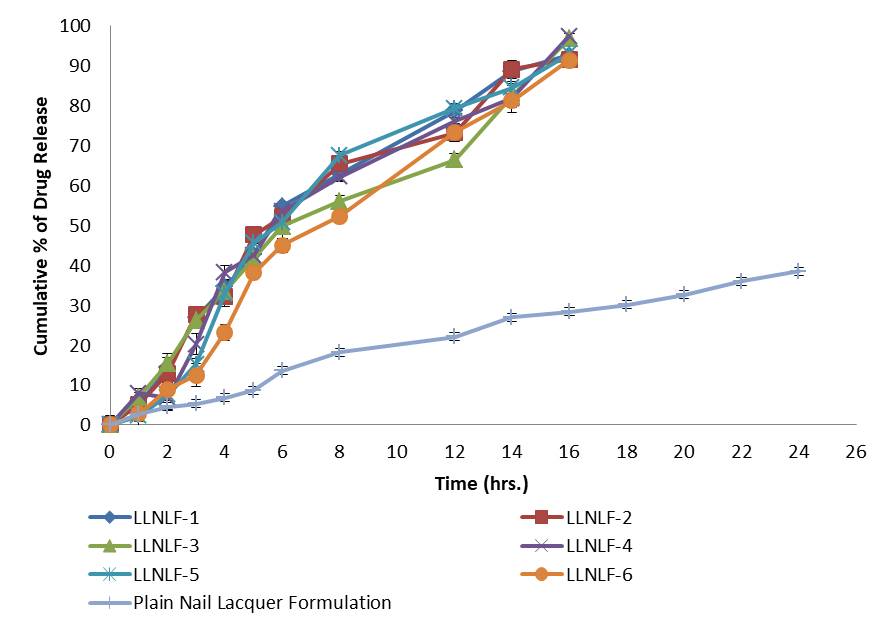 Preparation and Evaluation of Nail Lacquer

The application and performance properties of nail coating depend greatly upon volatility characteristics of its solvent system and therefore on its drying time. The values of the drying time were found in the range of 67-79 sec. As the polymer concentration increased drying time increased. This is a character of a film. It was observed formulation LLNLF-4 showed good smoothness due to lower polymer concentration and the color was found to be transparent. Formulation LLNLF-4 showed good gloss compared to LLNLF-5- LLNLF-6.

The Luliconazole loaded nail lacquer formulation (LLNLF-4) was showed highest In-vitro drug release (97.38±3.64), antifungal activity and smoothness among the other formulations. The designed drug delivery system thus would serve as an efficient tool for transungual permeation and can further be explored for the delivery of drug substances used specifically in nail disorders.

The authors are grateful to the Hema Pharma Laboratories Pvt. Ltd, Gujarat and Indore Institute of Pharmacy for financial support and facilities to carry out this research work in completion of present study.

The authors declare no conflict of interest.